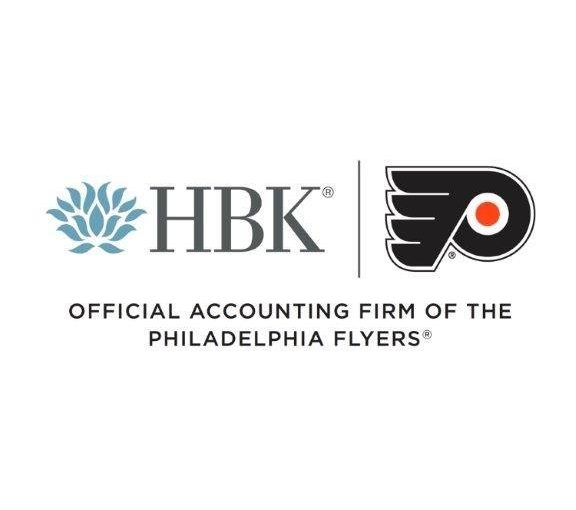 HBK CPAs & Consultants (HBK) announced today it has entered a sponsorship agreement with the Philadelphia Flyers National Hockey League franchise through which HBK was named the Flyers’ “Official Accounting Firm.” The partnership is effective immediately.

“We are excited to announce our new partnership with this great team,” noted HBK CEO and Managing Principal Christopher M. Allegretti, CPA. “The association with such a prestigious sports organization with such an illustrious history represents a great opportunity for any organization.”

HBK is a Top 100 U.S. accounting firm as ranked by Accounting Today magazine. HBK professionals have provided accounting, tax and consulting services to mid-market, privately held business owners and their families throughout the region for three decades.

Flyers fans will hear HBK radio ads during Flyers’ game broadcasts, and see HBK “virtual signage” in nine television broadcasts during the hockey season. And HBK will be the presenting sponsor for a premium item giveaway at an upcoming Flyers’ home game. As well, HBK will employ the Flyers marks and logo and the designation “Official Accounting Firm of the Philadelphia Flyers” in its marketing.

The Flyers partnership is HBK’s second major league sports sponsorship. They have served as the Official Accounting Firm of the Pittsburgh Penguins since October 2016.

Established in 1949, HBK serves clients ranging from individuals to small businesses to multimillion-dollar corporations across the United States through office locations in Ohio, Pennsylvania, Florida, and New Jersey. The firm specializes in a wide variety of tax, accounting, assurance, and business consulting services to assist clients in reaching their personal and business goals.