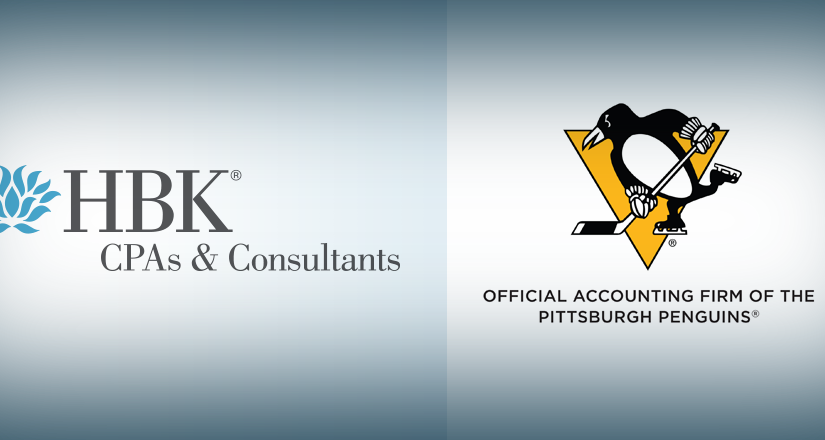 Pittsburgh, Pa. – HBK CPAs & Consultants announced today it has expanded its sponsorship relationship with the Pittsburgh Penguins to become the team’s “Official Accounting Firm” as the Penguins celebrate their 50th anniversary as a National Hockey League franchise. HBK became a Penguins sponsor during the 2015 season as the team made its drive to capture the Stanley Cup. “We’re proud to be part of the group of prestigious Pittsburgh organizations that count themselves as Penguin sponsors,” noted HBK CEO Christopher Allegretti. “As a firm with clients throughout western Pennsylvania and northeastern Ohio, this sponsorship is a natural for us, and as we continue to grow our business throughout these areas, a relationship with a major league sports franchise makes sense.” HBK is a Top 100 U.S. accounting firm as ranked by Accounting Today magazine. HBK professionals have provided accounting, tax and consulting services to small business owners and their families in Pittsburgh and throughout the region for three decades. HBK initiated its sponsorship of the Penguins during the NHL playoffs last year as Coach Mike Sullivan restructured one of his offensive lines as Carl Hagelin, Nick Bonino and Phil Kessel. The line proved one of the team’s most effective throughout the playoffs and became popularly known – and feared by opponents – as the “HBK line.” “Of course the HBK name coincidence was too good to pass up,” said HBK Chief Marketing Officer Michael Baldovski, “as was the opportunity to be associated with such a revered and recognized brand, not to mention the Pens are the reigning world champions of their sport and it is their 50th anniversary.” “The Pittsburgh Penguins are one of the most adored and powerful sports brands,” Baldovski continued. “They are the No. 1 digital media engagement sports franchise in Pennsylvania. They lead the NHL in merchandise sales. And Pens fans have been ranked “Best Fans in the NHL” by Forbes Magazine for three years running.” “I think our clients are as excited about this as we are,” Allegretti added. “We look forward to a great relationship with the team.” HBK CPAs & Consultants (HBK) and affiliate HBKS Wealth Advisors offer the collective intelligence of hundreds of professionals in a wide range of tax, accounting, audit, business advisory, valuation, financial planning, wealth management and support services from 14 offices in Pennsylvania, Ohio, New Jersey, New York and Florida. The firm is ranked in both Accounting Today and Inside Public Accounting magazines’ Top 100, and supports clients globally as a member of BDO Alliance USA.
About the Author(s)